The DL200X is the perfect data collector for various monitoring tasks in automation, control and feedback control systems.

Whether particle concentration, pressure, conveyor speed or flow rate, the DL200X can be configured for any requirement you may have, because instead of relying on internal sensors, it uses external connections for digital and analogue sensors.

Using an RS485 interface, up to four intelligent bus sensors can be built in, for example, particle counters or temperature-dampness sensors for cleanrooms.

Additionally, the DL200X has a 10 pin terminal, where two other analogue sensors can be attached to, for example, Pt100 temperature sensors, thermal elements (K, J, S type) or voltage and current sensors with the standardised signal for individual measurement transducer in various physical sizes and units.

At maximum configuration, six different sensors can run at the DL200X simultaneously, while universal measuring networks can operate in real time due to the device's LAN capability.

How many measured values can be recorded?

All devices from the DL series are powerful multi-channel data loggers with which you can not only detect, but also record all of the compatible measured values (see technical specifications).

The term "measurement channel" is not used to mean the same as it is by some of our competitors – meaning the available sensors, but instead – the same as in analysis software – it means one individually selectable "recording track", i.e. the value which should be logged.

For each measured value and measured unit (channel group), one or more of the four following types of measured values can be recorded: current, minimum, maximum or average. Each of these four values represents a measurement channel.

The maximum amount of available measurement channels for each data logger is thus the amount of detectable channel groups (e.g. temperature in °C) multiplied by the four types of measured values.

In total, 20 of these measurement channels can be freely selected for logging and three for being displayed.

All data loggers are available as an option in addition to the standard colour ­
anthracite, with white or yellow housing. 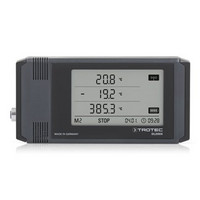 The DL200X is an optimal data collector for a wide range of monitoring tasks in automation, control and control technology.