Thermal images visualize the location and size of oil slicks – even in heavy swell and poor visibility.

Once an oil slick reaches the coast, the damage becomes particularly great. Entire animal populations are threatened, and the flora is destroyed. Depending on the size, it may even end in an oil pest. This is why conservationists and task forces work at full capacity in order to spot and eliminate the oil as quickly as possible. Particularly poor visibility and heavy swell require a keen eye. This is offered by the Trotec Group in the form of their high-performance thermal imaging cameras. The detailed infrared images visualize exactly where the oil remains are located and how great the danger is.

Accidents on the open sea often involve the escape of oil, especially when an oil tanker is affected. The damage is particularly great in this case. Since oil is lighter than water, an oil slick forms on the water surface. And since this thick mass moves more slowly, these slicks attract in particular sea birds, who perch on the seemingly calm surface. The result is devastating: their feathers are covered in oil, and the animals die in pain. If the oil slick reaches the coast, the consequences are even more disastrous. Because here not only animals but also the coastal landscape as well as humans are affected. The challenge for conservationists, task forces and employees of specialist companies is therefore to locate the exact position of the oil in order to have it eliminated as quickly as possible.

The fact that the leaking oil forms a slick in the sea makes it easier to locate the danger. Using thermal imaging camera, it can be visualized as a whole – either as a warm or as a cold spot on the infrared images. This depends on the time of day. Water and oil differ in terms of temperature. Since oil has a higher thermal conductivity, it usually absorbs the warmth faster during the day. The oil is thus warmer than the surrounding sea water. At night, the opposite is the case: the oil slick loses the warmth faster. Now the oil is displayed as a cold area on the infrared images.

The professional thermal imaging cameras from Trotec are champions in revealing temperature differences. They provide detailed infrared images on which the oil slick is visually precisely distinguished from the sea water. Especially when environmental conditions are rough and precise technology is required, the infrared cameras of the IC series are particularly recommended. In addition to notably precise technology for thermographic real-time measurements, they also offer an extremely broad range. Oil slicks and remains can thus even be located in the dark. Good visibility with the naked eye is no longer mandatory. Because the thermal images show the presence of oil in the water even in high waves, in fog and in heavy rain. Another advantage: the quality of the thermal images is not affected by foreign light sources coming from the coast or other ships. 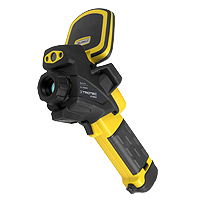 A high-performance example of the use of a Trotec thermal imaging camera for searching oil slicks is the Thermal imaging camera IC125LV. The model operates in a temperature measuring range from -20 to +1500 degrees Celsius and is equipped with a large infrared sensor with more than 110,000 independent temperature measuring spots. For an effective and successful application and a conclusive documentation the IC125LV comes with an integrated real image camera, photo lamp and DuoVision function for real-time indication of superimposed infrared and real images as standard. The optional Bluetooth connection allows task forces to add voice annotations to the recordings.

Further application examples for measurement technology in the field of thermography